For installment #3 of the series, I am going to answer my original post.  Why did Tonmann place a 10K trimmer off the emitter leg of the transistor?  Well hopefully I have answered my own question correctly after doing research on various common emitter amplifier topics.

As discussed in the first section above, an Emitter Resistor is added to the Common Emitter Amplifier circuit to accomplish two purposes, reduce distortion and control gain.

So what is the best way to make a compromise on the value of the Emitter Resistor?  Is it possible to get the best of both worlds, good gain and good temperature stability? 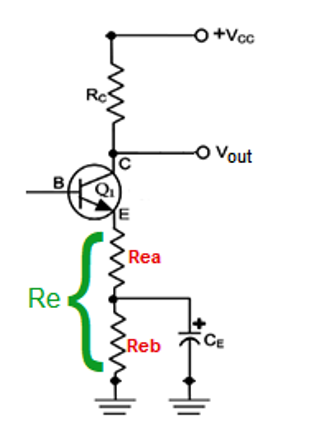 If you tap off the Emitter Bypass Capacitor (as above) between the two resistors so that the capacitor is in series with the first resistor (Rea) and in parallel with the second resistor (Reb), you can get the best of both worlds!  The resistor in the emitter leg has now been split into two parts: (Rea) and (Reb) forming a voltage divider network within the emitter leg with the by-pass capacitor connected in parallel across the lower resistor.

The upper resistor (Rea) is unbypassed by the capacitor so must be considered when calculating signal parameters. The value of (Rea) is chosen to provide the required compromise between gain and distortion as the AC signal current only sees (Rea). The second resistor (Reb) is connected in parallel with the capacitor and is considered to be Zero ohms as it becomes shorted out at high frequencies.  In other words (Reb) the second resitor is bypassed by the capacitor and thus the AC current doesn’t see R2.  Because of this, AC Voltage Gain is partially determined by (Rea) and for an AC signal the total value of the emitter resistance is equal to (Rea + Rbe) where Rbe is the Base-Emitter resistance (25/Re).  Since Gain comes from Collector Resistance divided by Emitter Resistance or Rc/(Rea + Rbe), the smaller value of Rea, the greater the gain.

Knowing that you want a small value of the upper emitter resistor (Rea) for greater gain, this would result in poor temperature stability and therefore some added distortion.  However, the Bypass Capacitor basically blocks (filters out) DC, so DC (bias) is forced to go through the Emitter Resistors placed in series, which is fairly large value.  Now you have your temperature stability and mitigate related distortion!

In summary, the DC bias current sees (Rea) and (Reb) in series, which results in good temperature stability, since total Emitter Resistance (Re) is seen by DC bias as a large value.  The AC signal current only sees (Rea) since (Reb) is bypassed by Capacitor placed in parallel (AC current doesn’t see R2) and so AC signal gain is related to (Rea) and (Rbe), therefore the amount of gain can be controlled by the size of (Rea).

As you can see, using a potentiometer as a Split Emitter Resistor allows one to adjust the amount of AC Signal Gain if you place the Emitter Bypass Capacitor off of the wiper leg, Lug 2.  Adjusting the 10K pot controls the amount of resistance (Rea) that is in series with the bypass cap, so gain can be adjusted.  Since in an amplifier, one usually wants a large gain, (Rea) should be kept small.

If you notice in the instructions for the Guitar PCB Pumped Up Rangemaster, that to “adjust the TR2 ‘GRIT’ trimmer properly, turn TR1 all the way up. The further clockwise you turn it, the louder and more of an overdriven sound you will get. Once you have it hooked to your amp, you may want to adjust it back up by 5-15% to suit your tonal preferences.”  Turning up the Trimmer apparently means making (Rea) a minimal value for the greatest amount of gain. Backing off the trimmer a bit decreases the gain slightly providing a slightly less “gainy” tone or sound.  It should be noted that the early treble boosters were meant to have the gain all the way up (that is to “11”).

Tonmann provided us with a modern design of the old Rangemaster circuit.  First, he changed the bias network and added a trimmer at R2, allowing us to fine tune the bias.  A large 470K resistor at R1 was changed to 200K possibly for easier parts availability, but in Installment #2 of the series, you can see that Tonmann applied some known standard design concepts to the bias network to conform more with convention.  The split emitter resistor is also a great addition providing greater temperature stability to the notorious finicky Germanium transistors that one finds these days along with more flexibility to control overall gain of the pedal (adjustable gain).  All Hail to Tonmann (RIP)!

Join Waitlist We will inform you when the product arrives in stock. Please leave your valid email address below.
×
×