And here is installment #2, a discussion of Common Emitter Amplifiers (yes I changed what the 2nd installment was going to be)

Next I will discuss the building and designing of a music signal amplifier using a transistor, and most signal amplifiers primarily apply to having a clean, non-distorted amplified output signal.  The reason for discussing the building of a CE amplifier is to see how the original designers of treble booster and other booster pedals used certain principles to come up with their circuits, and how they slightly changed or modified the circuit.  Basically, early booster pedals are fairly simple common emitter amplifier circuits with known design parameters using “formulas” such as what is laid out below.  The subtle differences in the Rangemaster circuit will be indicated below.

First of all, a Common Emitter Amplifier is so named because the emitter is the element “common” to both input and output.  That is, the input signal is applied between the base and emitter terminals while the output signal is taken between the collector and emitter terminals, or in other words, the emitter is common to both the base and to the collector.  In this configuration the input parameters are Base-Emitter Voltage (Vbe) and Base Current (Ib) and the output parameters are Collector-Emitter Voltage (Vce) and Collector Curent (Ic).

For designing an amplifier, the following parameters are chosen.

Values of 6 to 12 volts are common for a common emitter voltage amplifier. Of course for a guitar pedal, a supply voltage of a 9.0V battery is pretty standard.

Usually a low gain NPN or PNP transistor is sufficient.  We will choose a NPN Germanium transistor with an HFE of 90.

Iq is the Collector current when no signal is applied. Using the transistor datasheet, the maximum value must be less than the maximum Ic(max) figure for the transistor.  The circuit is supposed to be a VOLTAGE amplifier so current should be kept quite low. However, the lower the current you choose, the higher the value of load / collector resistor RL (aka Rc) will be.  This increases the output impedance of the amplifier, which will be approximately the value of the load resistor, and ideally this should be low. A compromise figure of 10 to 20% of the transistor´s Ic(max) and a commonly selected current of around 1mA is used by many.  For example, parameters I found on both OC44 and OC75 Datasheets give a Maximum Collector Current (Ic max) of 0.01 A, or 100mA.  A value of 10 to 20% of the Ic(max) is 1.0mA – 2.0mA.

Let us choose 1.5mA, right in the middle.

Once the supply voltage and collector current are decided, the value of the Load Resistor (Collector Resistor Vc) can be calculated. The transistor quiescent collector voltage needs to be slightly less than half of Vcc (range Vbattery/3 < Vce < Vbattery/2) so that the output signal can swing by equal amounts above and below this value without driving the transistor into saturation (0.0V and maximum collector current) or cut off (Zero current and Vc = Supply Voltage Vcc). This will define the resistor value using Ohms law and therefore RL (aka Rc) will therefore be slightly less than half Vcc divided by Iq.  For this example, let’s choose a voltage of 4.45V along with the Ic of 1.5mA for 4.45V/1.5mA = 2.97K with the closest available value of 3.0Kohm.

This gives a Voltage Drop across Rc of 4.5V, and matches half of the battery Supply Voltage Vcc of 9.0V.

To provide efficient bias stabilization, the Emitter Voltage (Ve) should be about 10% to 15% of Vcc.  So choosing a value of 15% of the Vcc value of 9.0V (1.35V) for Ve and assuming that Ie is the same as Ic (It is only different by the small amount of the base current), the value for the resistor Re can be calculated by dividing the Emitter Voltage Ve by the Emitter Current Ie (1.35V/1.5mA = 0.9KOhms).  Choosing the nearest preferred value of 910 Ohms or the more common 1.0KOhms may be used. Let us choose 1.0K in our design.

The Rangemaster uses 3.9K emitter resistor, and although I don’t know the exact reason for this, it is probably related to providing greater thermal stability of the transistor. The higher the value of Re, the greater the stability of transistor current when it comes to temperature induced changes.

This can be found by dividing the Collector Current Ic by the transistor´s current gain HFE (aka Beta) obtained from the data sheet. Because the HFE varies from one transistor to another (even the same transistor model number) it should be known that this is a typical value, or as a range between minimum and maximum values for a bunch of these transistors.  HFE also varies with collector current, so whatever value is chosen for HFE, the result of calculating Ib will be an approximation and therefore the measured base voltage may not be entirely accurate with respect to the calculation. However, this can be ‘fine tuned’ when the amplifier is being constructed.

The base voltage should be about 0.7V for Si transistor (0.3V for Ge) greater than Ve to ensure that the input signal is biased on the linear part of the transistor input characteristics.  For this example of a CE amplifier with a Ve of 1.35V and powered by a Ge transistor, this means Vb = 1.35V + 0.3V = 1.65V for a non-distorting bias voltage.

Note that compared to the Rangemaster, the calculated bias voltage here is further away from the cutoff emitter leg voltage of 0.3V, so even with a high voltage negative amplitude pickup signal of -600mV (highest a vintage PAF pickup produces) that the base voltage does not approach cutoff.  That is, there is still greater than +1V base voltage on the greatest negative amplitude voltage swing, so there should be no flattening of the negative amplitude portion of the signal waveform.  Therefore, there should be only clean non-compressed and non-flattened output signal.  So there is no Rangemaster “magic” here with a standard amplifier design.

The Rangemaster was intentionally biased on the low side so there would be mild distortion of the output signal, as discussed in the first installment.

9. Calculating the resistance for R1

10. Calculating the resistance for R2

Note that the Rangemaster has much larger values of R1 and R2.  Again, I do not know why the original designer chose these values, but one of the formulas that can be used for biasing the transistor using a divider network is R1+R2~(10)(R3+R4).  This would give larger values for R1 and R2, but not quite as large as the original circuit.  However, I note that Tonmann must have recognized this and his bias network uses smaller resistor values (200K for R1 and R2 should be around 29K using the trimmer).  Tonmann’s version is closer to this concept as a 10K max Rc and 10K max Re multiplied by 10 would be around 200K.

The gain of the circuit without a capacitor across the emitter resistor is approximately Rc/Re. To increase the gain of AC signals and further stabilize the bias voltage, an emitter resistor bypass capacitor C3 is added. This should be calculated to have a Reactance equal to one tenth of Re at the lowest frequency of operation. The formula to calculate bypass capacitor C3 is given below.

For our example, we will choose 20Hz, the lowest frequency of human hearing, as our frequency.  Therefore,

The Rangemaster uses a larger emitter resistor (Re), so a capacitance of approximately 22uF would have been fine for increasing gain relative to the lowest frequency of human hearing.  The 47uF used in the Rangemaster is fine as it passes passes frequencies above 9Hz which is below the audible range of human hearing.  Maybe this was used because it was a commonly available capacitor at the time the originals were built.

Below is the schematic of our Common Emitter Amplifier circuit with a few Rangemaster values in parentheses for comparison. 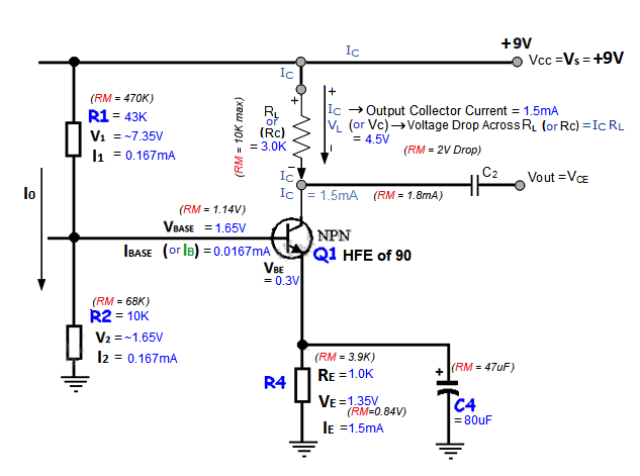 Armed with the knowledge of common emitter amplifiers as it relates to treble boosters, I took another look at the Silicon Hornby-Skewes treble booster that I previously built as well as others including the modern Naga Viper and a Germanium  Hornby-Skewes treble booster I recently breadboarded.  They are all similarly constructed with a few variations.  Knowing that the Silicon Hornby-Skewes has a 1K emitter resistor similar to our amplifier example above, the bypass capacitor calculated at 80uF is exactly what is on the original HS schematic, providing confirmation of the principles outlined here.  I think anyone with this knowledge could easily design their own working booster pedal.

There are no users currently online

Close Menu
Join Waitlist We will inform you when the product arrives in stock. Please leave your valid email address below.
×
×